In 1913 the Balkan Wars were still a thing. The dissembling of the Ottoman Empire was stressing Europe. Russia was allying with the emerging Slavic groups, the shift threatened the Austro-Hungarian Empire and sent ripples of concern across Europe. Having just undergone industrialization, new ways of looking at economic and political structures were taking hold and giving rise to revolutionary movements against traditional monarchies. The art world was responding with its own revolutionary reordering—the Modernist art movement was reaching a crescendo with Picasso’s cubism.

Against this backdrop, avant-garde Russian architect, Vladimir Tatlin visited Picasso’s studio and was inspired by his edgy experimentation. Seeing Picasso’s fracturing and reordering of perceived content led Tatlin to the realization that art does not necessarily create the content, but that the content can create the art. Hence the eventual five principle’s of the Realistic Manifesto (as written by artists and brothers, Naum Gabo and Antoine Pevsner, 1920) that articulated the constructivism movement. 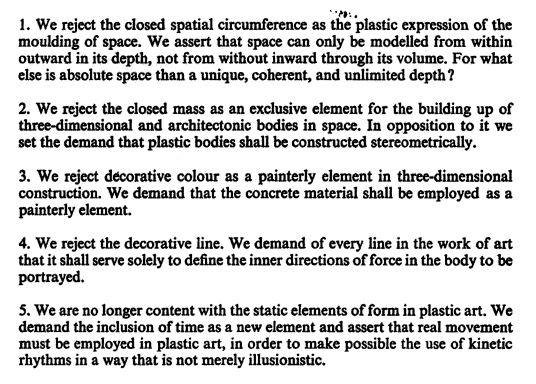 This seemed to track the new bottom-up world view that was the Marxist engines of Bolshevism, placing more importance on the elemental or “proletariat” constituents of a subject than the ultimate illusion. In a new iteration of the truth, Constructivist art stripped a subject to its basic shape and function.

Between Tatlin’s studio visit of 1913 and the Manifesto of 1920, Europe’s destabilization accelerated with WWI (raging between 1914-1918, with continuing treaty work until 1924) and the Bolshevik Revolution (October, 1917) that replaced the Russian monarchy with Leninism. Certainly this turmoil reinforced Tatlin’s and his Constructivist followers’ drive to find basic truths in abstraction and to rely more on modern methods and materials than traditional media. And again, this tracked with emerging economic reactions to industrialization by using the shapes, materials and methods that had exploited the worker as media reconstituted in work that revealed the modern circumstance, its problems and possibilities. The use of unadulterated patterns, shapes and even materials was not well received by the art critics of the day, and one inadvertently gave the movement its name when he insultingly reported that work by Alexander Rodchenko looked like “construction art.”

The Constructivists embraced this moniker and sought to manifest it literally, considering art as a means to construct a utopian future. Constructivist art actualized through Tektonika, exploitation of industrial matter as media, and Faktura, in the context of promoting utopian communism or social change. Again, this is happening at the time of hopeful transition from ineffective monarchism to energetic Leninism, so that the Constructivists were using the geometric building blocks of visual art, recognizable and available to all, to extol the fundamental value of the basic people as building blocks of society. This revolutionary and egalitarian approach is often characterized as unemotional or sterile, but arguably its absence of a dictated feeling leaves room for a future one either to be determined collectively or decided by the individual viewer.

A group of Constructivists took this to an extreme—that artists should do their work in industry, that true constructivist art is applied art. This group formed a movement called Productivism that rejected Constructivism’s focus on solving the more esoteric artistic problems of spatial and rhythmic relationships. The progression of thought that true art must be useful seems to have been tracking the political tightening of Russia’s iteration of communism into an oppressive regime.

The Constructivists and Productivists thought art should serve to secure the new social order that would be communism, and should not be merely an intellectual or spiritual exercise in and of itself. Although their art was premised upon advancing the revolution, as the revolutionary government evolved, the artists and intellectuals who were essential to the cause came under suspicion and eventually their work was rejected or purged. Ironically, the political machine they brought to power would reject them while co-opting the political usefulness and geometric strength in the restyled genre of Soviet Social Realism (a state approved art movement that glorified Soviet dictated values and propagandized for Stalinism; not to be confused with general international Social Realism that is critical of such propaganda and manipulation of the masses). In an ironic twist the Constructivist’s once progressive visual themes were used as a means to convey oppressive propaganda to the masses with its then maudlin and familiar appeal, harkening back to the hope and promise of the revolution. Thus the movement journeyed from its intent of liberation to a weaponized art form.

Constructivist art is marked by a commitment to total abstraction and a wholehearted acceptance of modernity. Often very geometric, it is usually experimental, rarely emotional. Objective forms which are thought to have universal meaning are preferred over the subjective or the individual. The art is often very reductive, paring the artwork down to its basic elements. New media and unexpected media are used. For the original Constructivists, the context or Faktura was crucial; they were seeking a new order of art, rejecting the old order that had culminated in World War I, and promoting a world of more understanding, unity, and peace. This political component of constructivism, often was omitted from later abstract art, but has had a recent resurgence in street art (e.g., Banksy and Shepard Fairey). Today, purely rooted Constructivism, as well as its ironic usage, is as relevant as ever. Think of hackers or fake news generation—using contemporary elements as media to shape thought or further an agenda. As with any provocative or political argument, the reception is dependent upon whose ox is getting gored, and when and where.

In the gallery (through April 8, 2017), we have two Ukrainian artists whose lives and artistic training were influenced by their country’s active history with Constructivism (e.g., Ukrainian Louise Nevelson is an exemplary Constructivist artist who advanced the movement and its progeny in the west). Both multimediaist Andrey Maslov and photographer Guennadi Maslov have a geometrically muscular sensibility to their work. Both consider the contemporary circumstance and, whether intended or not, their art provokes a response to it, either in the discovery of what is, or the thought of what could be.

Germany was the site of the most Constructivist activity outside of the Soviet Union (especially as home to Walter Gropius’s Bauhaus, a progressive art and design school sympathetic to the movement), but Constructivist ideas carried as well to other art centers, like Paris, London, and eventually the United States. Gabo, Pevsner, and El Lissitzky brought Constructivism from the Soviet Union to the West. Laszlo Moholy-Nagy came to Germany from Hungary, Theo van Doesburg from the Netherlands. Ben Nicholson was the most prominent English Constructivist. Josef Albers and Hans Richter encountered the movement in their native Germany but were also instrumental in its international dissemination.