In the past, I’ve invited you to exhibits I have curated and shows of artists I’ve followed.   Today, I must to tell you about a gallery exhibit that is worth a trip to see in the cold of January.  It is Resolutions: 1. More Art which just opened at Wash Park Art, 1215 Elm Street, downtown next to Music Hall, on the streetcar line.  The show runs through February 18, 2017.  See hours at www.washparkart.com.

Holly Doan Spraul, gallery owner and curator, offers in Resolutions, a super exhibit that can show those who collect or simply enjoy a diversity of art just how effectively in a very small space – possibly similar to our own homes –  a range of art and photography by 19 artists  can be presented.   She has created an exciting, mentally challenging and visually pleasing exhibition.

If you haven’t been to Wash Park Art, it is an old, elegant shot-gun style home, and in it Holly links and unifies this exhibit from your first step into the former living room through the dining room and finally the kitchen.  Resolutions is about living with an eclectic collection.  Holly has done it right!

The exhibit’s complexity makes a short description here incomplete at best.  Large and small groups of work, plus pairings within groups are in all rooms and are intriguing, unexpected.  Paintings and photographs usually aren’t hung together vertically – but here it works!   In Resolutions, these combinations speak to one another in their color, lines and shapes, and rhythms.  Both figurative and abstract appear and meld.  Viewing the show is like a good puzzle you enjoy working on that comes together as your realize what has been created for you.  You look forward to seeing what is in the next room.   For instance , one sees immediately in the living room a large surrealistic  figurative  by Thomas  Towhey  that speaks to an abstract architectural by Cedric Cox on the opposite wall, but then you discover the adjacent groupings interact with these larger works as well as within their own group.  There is a texture that emerges through the rooms and ends in the kitchen with the final bold punctuation of Mel Toledo’s  exquisite photo-realistic  floral oil and then the big, bold, other-worldly  blue-toned  “gas mask” eyes of Kurt Grannan’s  painting in juxtaposition to a final unexpected  darker blue-toned photograph/painting grouping  of  Guennadi Maslov and Robert Hebenstreit, respectively.  There are many memorable images, many artists whose work was new to me but very welcome, and offerings in new styles from familiar artists (e.g., photographer Kent Krugh).

A couple of other points:  Holly has provided interesting, relevant information about each artist, often including how the artist came to be exhibited.  All works are for sale and pricing comes with a welcome range.

There was a good feeling in the response of the crowd that came January 6.  They welcomed this exhibit giving it serious study and discussion.   Holly takes risks.   I hope she takes more if they are this well executed.

An Honored Moment for the Gallery: Mary Heider’s Letter to Her Art Audience 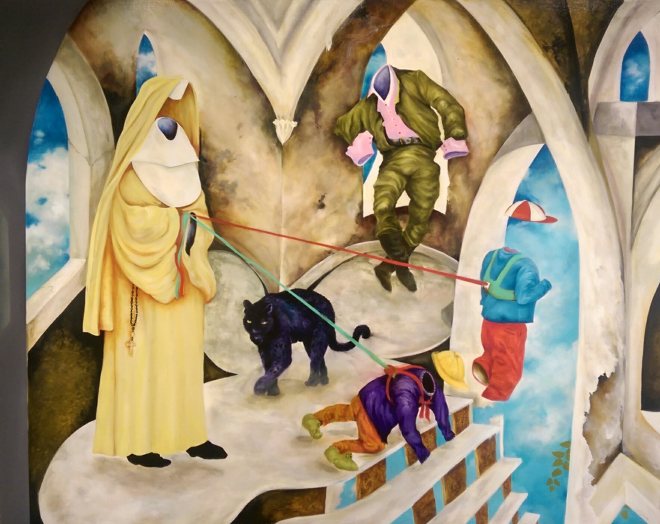 In 1924 French poet, André Breton published the Surrealist Manifesto founding a genre of art and thought that is still relevant today. He defined surrealism as,

“Psychic automatism in its pure state, by which one proposes to express — verbally, by means of the written word, or in any other manner — the actual functioning of thought. Dictated by thought, in the absence of any control exercised by reason, exempt from any aesthetic or moral concern.”

Psychic automatism is a sort of expressive stream of consciousness, unedited and unguided by any external concerns. Automatism in practice is as problematic as meditation.

“Meditation is a word that has come to be used loosely and inaccurately in the modern world. That is why there is so much confusion about how to practice it. Some people use the word meditate when they mean thinking or contemplating; others use it to refer to daydreaming or fantasizing.” (https://yogainternational.com/article/view/the-real-meaning-of-meditation)

The parallels are apt, people practice both for the same reason, accessing some aspect of the subconscious. The debate about the purpose and value of both seems to turn on whether the subscious is more indicative and trustworthy than rational thought.

The surrealist movement was radical in its estimation of the subconscious as superior to reason—thus “sur“—above, on, over reality. In the context of 1924, this probably was a reaction to Sigmund Freud’s newly posited theories about psychopathology and treatment as well as the interwar milieu of geopolitical and economic instability resulting from the redrawn map, depletion of capital, antagonistic reparations, shift from wartime industry, and general fatigue. Reality simply wasn’t that great, there had to be something better, like the subconscious. Thus, surrealism can be argued as at best a redemptive effort to find the higher ground of existence, or at least as simple escapism into introspection.

The effect of surrealism is complicated by the artist’s rational assumptions or incorporated reasoning. The art of Salvador Dali is widely thought to be premised on an assumed primacy of sexuality in the subconscious, and René Magritte’s art intentionally challenged perceptions as much by what was omitted as by what was included. Through this more intentional, often representational, approach, surrealism evolved to be less psycho-automatic or revelatory of the artist’s psyche and more contrived to be revelatory of the viewer’s.

Indeed to some extent all art seeks a surrealistic reaction from the viewer, a core and basic reaction that can be as simple and irrationally explicit as “I don’t know why, I just like it,” or as enlightening as an epiphany clarifying reality with a symbolic experience.  In Towhey’s painting it is up to the viewer whether the nun’s tether is depriving the children of their humanity or saving them from a fall from grace, or is part of an entirely different narrative. The viewer’s subconscious reaction can be conflagrated or obscured by their rational thought, or not. The painting is merely a ticket for that ride.

Surrealism deliberately gives us “alternative facts,” which like all distortion ironically makes clearer the rational truth by contrast. Whether the alternative facts, of themselves or in effect, are superior to or truer than reality is debatable; and that debate gives surrealism its enduring and provocative value.

Towhey’s painting and other surrealistic works can be seen at the gallery through February 18th in “RESOLUTIONS | More Art,” an exhibit of more than 20 artists, curated into a cohesive collection.